Many restaurants in Candidasa offer car pickup which was a really nice feature – even though the main part of town was a manageable walk from our hotel, the narrow roads and alleys make it a little dicey at night. Our first dinner was at Le Zat and we arrived before sunset so we could relax with a Bintang overlooking the water. 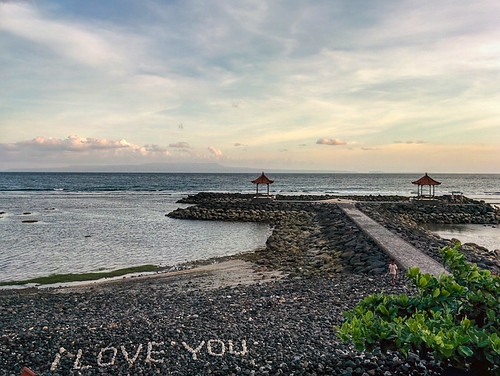 the view from our table

We found the food to be pretty good, which was a bonus, as this is the kind of place you come to primarily for the view. The service dropped off a bit at the night progressed, there seemed to be a lot of trainees on the floor (identified by their name tags), but overall it was a fine experience. 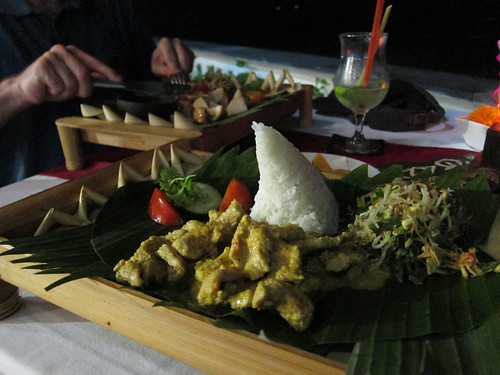 We wound up eating at Vincent’s twice because of a slight error on my part but thankfully it was some of the best food of the trip so I was not disappointed! We made reservations for the restaurant on our second night and the service, food and atmosphere was wonderful. We were seated in the outdoor courtyard behind the restaurant surrounded by plumeria trees.  Eric had Bali pork (babi kecap) and I had the mahi mahi special with coconut milk in a banana leaf. Everything was delicious.

Even though we enjoyed ourselves, I decided that instead of going back the last night we should instead visit their sister restaurant, La Rouge, which had a bit more Indian flair. Instead of dealing with the hotel front desk again, I simply emailed the restaurant requesting a reservation. They wrote me back to confirm and I failed to notice that the byline said Vincent’s Restaurant. Apparently the email for La Rouge goes to the same place as Vincent’s and I did not specify which restaurant I meant. When the car arrived there was a bit of confusion about where we were going, but rather than stay at the resort, we decided to just go with the flow.

This time Eric had the chicken pot pie and I opted for the fish curry stew. We split another sorbet dessert and laughed about our accidental repeat visit, and the occasional ‘moo’ from the neighboring property. 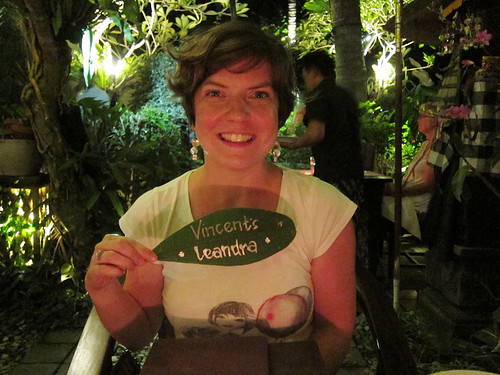 a charming feature in Candidasa if you make a reservation 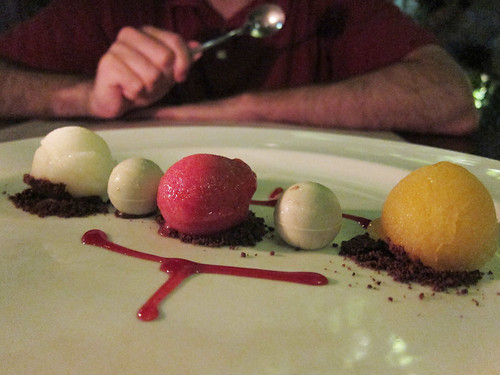