The east side of Bali has several temples and sights of interest, so we search Tripadvisor and a few other websites for a driver and found Gejor. Before our trip we corresponded via email and settled on an itinerary to visit two water temples, Tirta Gangga and Ujung (aka the Royal Water Palace), plus White Sandy beach (Pantai Putih).

Gejor picked us up from our hotel right one time and drove us out to the farthest sight first, Tirta Gangga. The route was more rural than our previous trips around Bali with lots of banana and coconut palms – honestly, this was more what we had expected Bali to look and feel like!

Tirta Gangga itself was magnificent, easily my favorite man-made sight of the trip. You enter through a narrow gate and are greeted with a expansive set of water gardens. 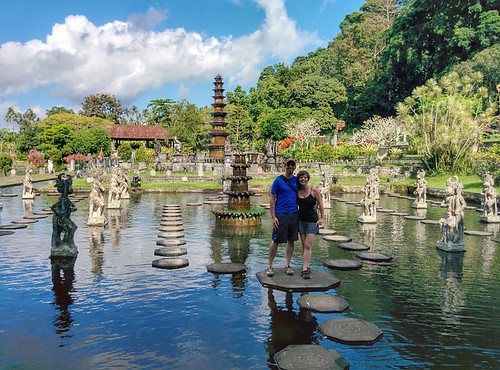 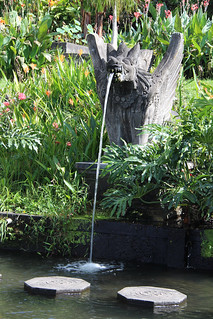 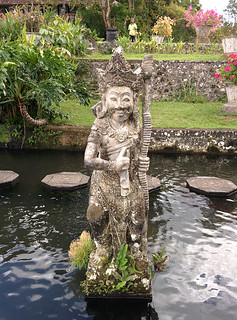 As a water garden aficionado, this was pretty close to heaven for me. Huge koi, lots of lilies, water fountains, dragonflies, flowers… and no sarongs needed! 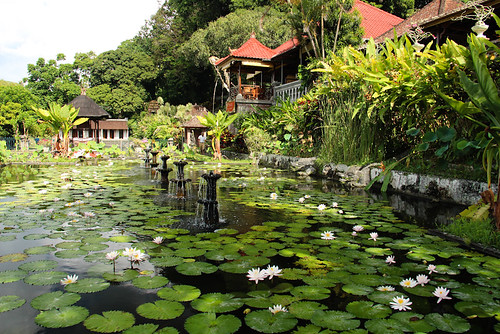 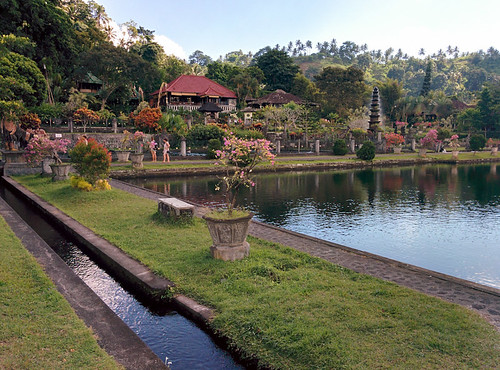 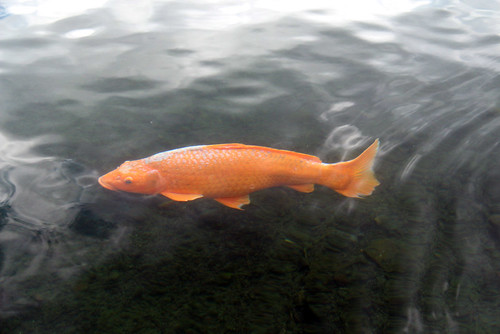 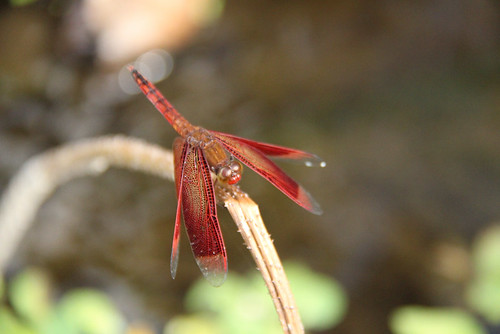 We even had a bit of fun with the panorama feature on our phones. (click to enlarge)

Next stop, Ujung/Royal Water Palace, which was closer to the coast. This sight felt bigger but newer, and not as grand or lush. We started to our left, including the long set of steps in hot sun! Our sweat was rewarded with a good view over garden and coast at least. 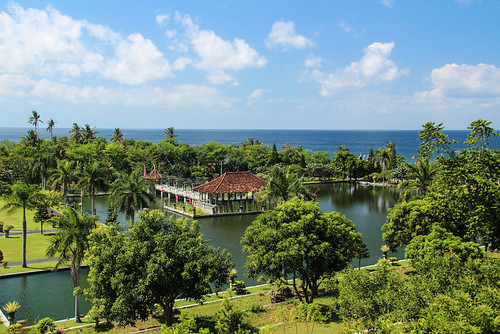 There were several buildings built over the ponds too. 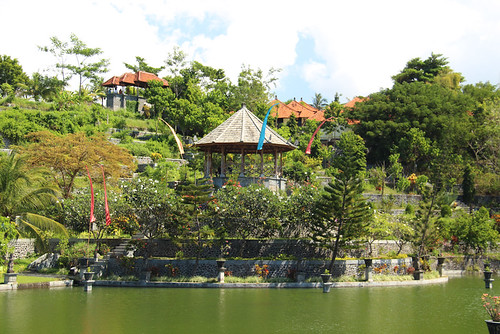 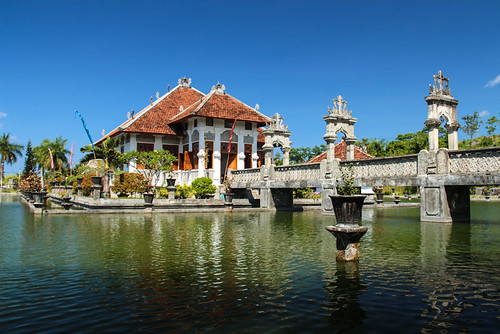 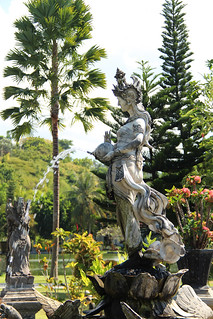 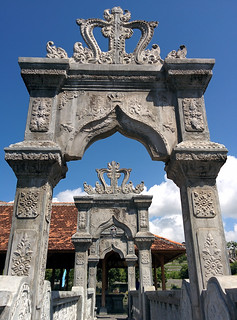 In the end, this sight was a letdown for me after Tirta Gangga, but it was still quiet and peaceful and worth a visit.

Next up was White Sand beach, also known as Virgin Beach. This beach is privately owned so there is a small entry fee levied by the village (about 50 cents) followed by a long bumpy drive down a dirt road. The beach itself was quite nice, wide and reasonably white, considering we are very close to a volcano and that usually means black sand.

Chairs were 25k each for the day, and they will move chairs and umbrellas for you upon asking. We choose a spot on the left side under a tree which seemed a bit quieter. Lots of massage offers on the beach that were annoying after a while, especially since you paid to get in and for a chair. I went snorkeling first, and found the reef from the middle of beach (look for the  buoy) to the outriggers on the far right seemed best. There was some litter in water and some damaged coral, but a good number of fish too. 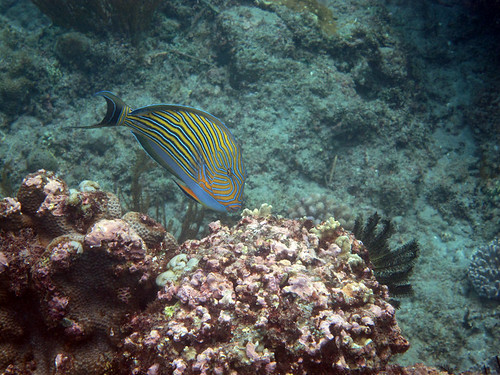 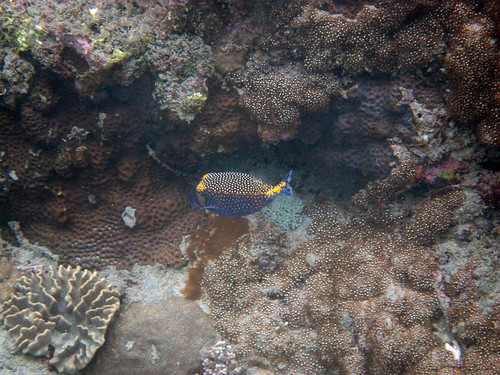 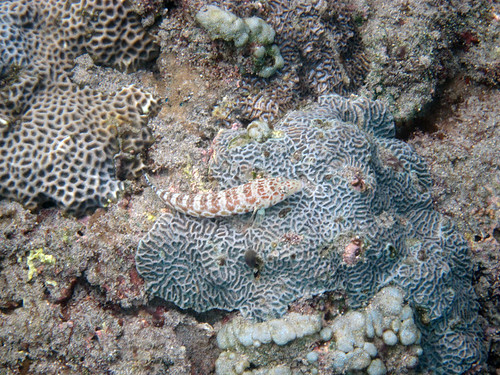 Leandra went out later but the swells and current had increased so she came in after 20 minutes. We both relaxed and enjoyed our books on the beach for a bit. Around 1.30pm we noticed an increasing number of people ariving to the beach. I went for a second snorkel around 2pm, but the water was still rougher so photos were more difficult. 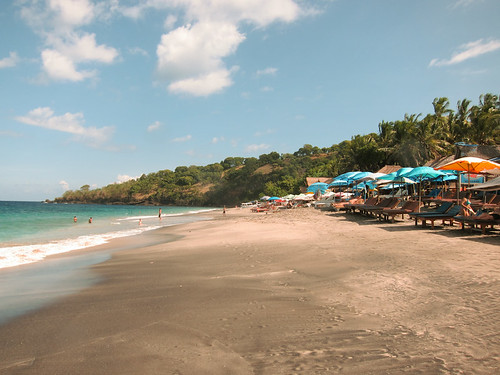 Before we packed up, Leandra sought out some ginger ale to give us another option besides water, but surprisingly, the beach vendors didn’t have any, just a cooler filled with water and club soda. Ultimately, we decided not to have a snack here and headed back to the hotel around 3pm. Altogether it was a fun day-trip away from the resort, and left us plenty of time to relax along our resort’s beach (probably their best feature).