A few times each year business class flights to Europe go on sale near to the price of economy. We’ve taken advantage of these fares before, notably in the summer (Amsterdam 2011) and Thanksgiving  (Vienna 2013). This spring saw another 24 hour sale on Air Canada flights to Europe via a few select cities in the US including Atlanta, which we could get to easily with Southwest points. We narrowed our list of possibilities to Copenhagen, Krakow, or Lisbon, and eventually choose Copenhagen for the best connection times for a US Independence Day holiday. No fireworks for us this year, but we would have nearly 18 hours of light each day to explore Copenhagen and nearby Malmo, Sweden!

Our flight from Atlanta to Toronto was uneventful save for the overhead bin space situation. The regional jet had minimal overhead storage space, but because we were in business class we had just enough room under our seats to cram our rollerboards (see right photo). Needless to say, we didn’t need to use our foot rests for this flight!

Arrival into Toronto was fairly easy, thankfully they have a transit immigration desk (you still need to fill out a form, but no questioning for us) that kept us near the lounge and our gate. The Toronto Maple Leaf lounge was quite nice, with a good food and selection of drinks, including Guinness on draft, a few hot dinner items, and several seating areas. After a quick snack in the lounge we made our way over to our gate where boarding was about to begin.

For the overnight flight we had herringbone (angled) seats with feet pointed toward the aisle. Seats were similar to Cathay Pacific 747 seats, with a little more room and a more updated feel, but still a bit tight. They do provide a good bit of privacy for sleeping which is nice on a overnight flight, but you can’t easily talk to a traveling partner given the walls and aisle. At our seat was a blanket, pillow and amenity kit that looked to be a good re-useable size.

While still on the ground we placed orders for dinner, with Leandra choosing the beef tenderloin with lobster mashed potatoes and asparagus while I went for the Thai green curry chicken. Both were OK, not terrible but not great either. Given the relatively short flight we both flattened our seats after dinner and managed a few hours of sleep. We were a bit disappointed in the sparse continental breakfast before landing but thankfully weren’t that hungry yet anyway. 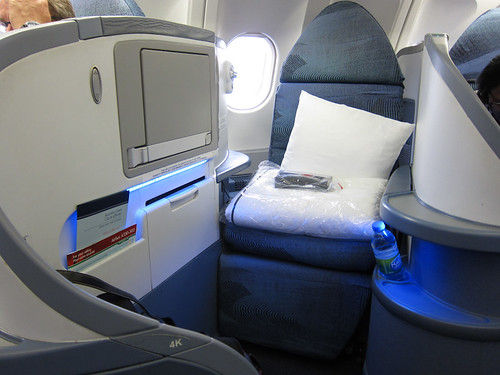 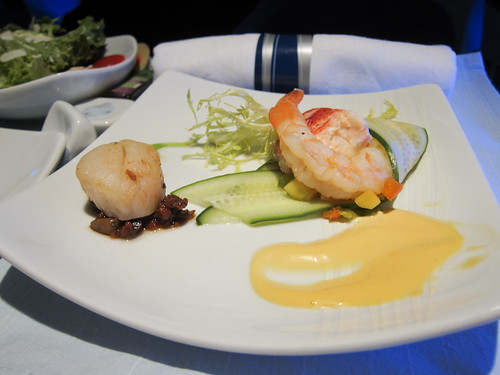 Our return flight on Air Canada was canceled about four hours out as the original plane never left Toronto due to a mechanical problem.  So, we headed to the airport to see what our options were. We found a very helpful gate agent and asked her to get us home to RDU rather than Atlanta as we originally booked. After 20 minutes of phone calls, she managed to snag us the last two seats on a SAS flight to Dulles, then premium economy seats to RDU on United. Since we were on SAS we had a separate express security area that was quite open, and the lounge was right next door. Excellent!

The SAS lounge is styled as a large living room, with a fireplace (it was on – a bit silly in the summer), lots of comfy chairs and a food area with soup and a few other snacks. Note that you clear immigration after the lounge and there is usually a  line – for us it stretched past the lounge but moved fairly quickly and we were through in about 20 minutes. The gate area was separated from the main hallway but they did have a bathroom and plenty of seating (unlike at Heathrow).

The SAS flight was quite different than Air Canada, with older angled-flat seats in groupings of two, not as good for overnight but quite comfortable  for a daytime flight. The amenity kit was really cheap looking, not much better than the kit from Airberlin economy class (!).

Thankfully, the quality of the food and wine was quite good. We started with a caviar and smoked fish appetizer and Leandra ate both of ours. The mains were also good, I had the BBQ chicken and Leandra choose the flank steak. One nice surprise was the quality of the champagne – apparently Heriot’s 2007 vintage is only available on SAS flights and it was delicious; the 2009 Sauternes from Chateau Broustet was also tasty with dessert. On a side note, it was interesting that the flight attendants had a chef’s outfit on for lunch, then changed back to their regular outfits for the later snack. 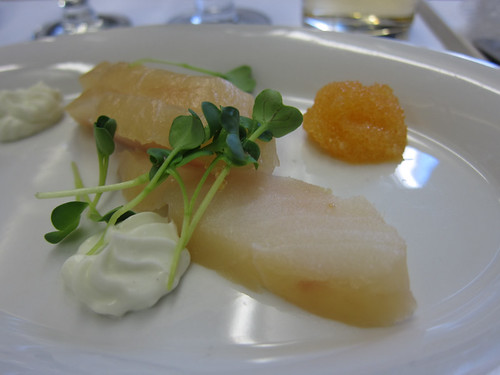 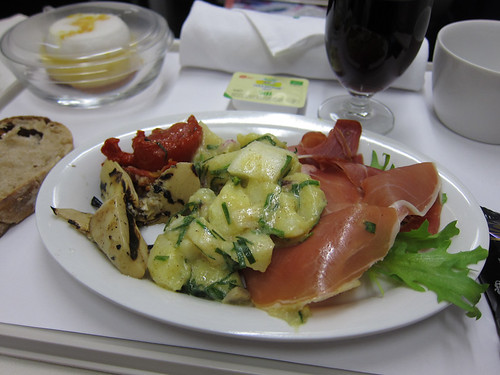 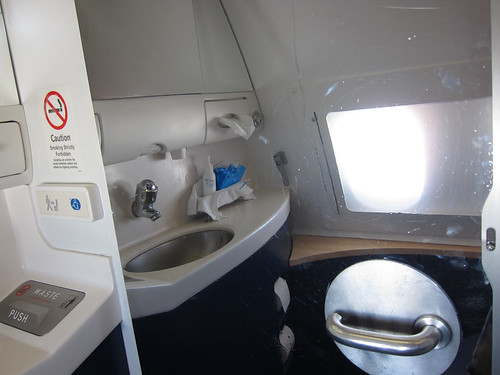 the bathroom had two windows with tons of natural light

The entertainment options for the SAS were rather poor, both with regard to the screen and audio, as well as the selections. Thankfully we always bring out own movies! Overall we thought the SAS flight was quite comfortable.

The good news is that with the Air Canada cancellation and the persistence of the gate agent in Copenhagen, we actually arrived home 16 hours before our original itinerary. So it would up working out well for us since we were able to cancel — without penalty — our overnight hotel reservation in Atlanta (booked on Hyatt points) and the return portion of our Southwest flight (also booked on points)!