Another item on Eric’s must-see list was this small village ringed by roads with names like Rue de Riesling, Rue de Traminer, etc. Luckily we found a free parking spot near a park just north of town so it was only a five minute walk and didn’t have a time limit. Even with the cloudy skies we were both taken in by the town’s charm, including the main chapel dedicated to Pope Saint Leo IX (who was born here). Educational plaques were located all over town to let visitors know about historical features. For example, we learned to look for inscriptions above the doorways, which usually featured a blessing and the initials and marriage date of the occupants who lived there. All the wine tasting rooms are closed for lunch (usually between 12-2), so around 11a when it started to drizzle we stopped into Paul Schneider (above) for a tasting. Eric loved the whites and I really enjoyed the sparkling selections. The Pinot Noirs were a little too dry and floral for me. The woman doing the pouring was personable and spoke English well, and it was all around a great experience. Eric had his work cut out for himself as he had to narrow it down to only two bottles to bring home!

We had scoped out a lunch place ahead of time, so it was only a quick dash in the rain to La Galinette for crepes. My crepe was loaded with bananas – I am pretty sure there was a least a banana and a half in there along with chocolate and fresh whipped cream. So good. Eric’s raspberry and chocolate crepe was also tasty. By the time we finished lunch the rain had stopped so we grabbed a pretzel from a nearby vendor and spent another hour wandering the lanes, taking photos and getting lost amidst the flowers and exposed beam buildings.

Our next stop was a short hike to some ruins named, perhaps ambitiously, the Three Castles of Eguisheim. The ruins did have spectacular views of the valley below… I really wanted to say I had been to Munster (like the cheese!) so Eric directed us there next. This was the portion of the trip where I lost track of how many storks I had seen. They were EVERYWHERE. On the way to Kaysersberg I really needed to stop and use the restroom, so Eric found Jean Baptiste Adam on the way. The tasting room was packed when we arrived, but we managed to grab an opening after a group of three left. Pauline, our main pourer, was very friendly and attentive despite being incredibly busy. We bought a bottle each of the 2015 J.B. Adam Pinot Gris Alsace Letzenberg and 2014 J.B. Adam Riesling Wineck-Schlossberg, then returned a few hours later just before they closed at 7pm for a cold bottle of Cremant (bubbles) that we enjoyed before dinner in Colmar.

Then we wandered around a bit because, well, all these towns are just too pretty not to. Unfortunately, the bakery I had bookmarked was closed but we had better luck in Kaysersberg. Our first stop was wine tasting at Domaine Paul Blanck. This place is all about the whites – Eric tried 11(!) different wines, mostly Riesling, while I sipped the two sample reds available. This tasting room was the most rustic with large wine barrels nearby and a cave-like feeling. Quite a contrast from the modern tasting rooms we had seen thus far. Our host was a bit cold at the beginning but as he realized we knew a bit about wine, he opened up and enjoyed making additional suggestions. Eric could have tried all twenty wines if he wanted! 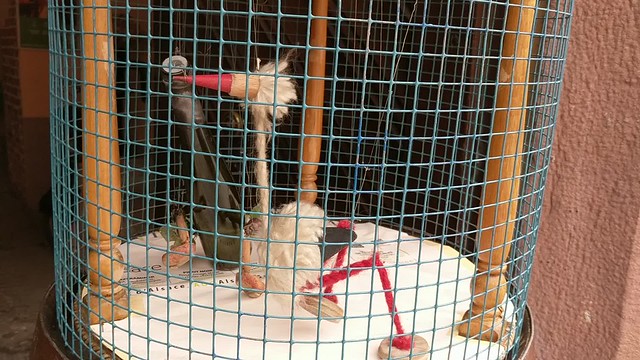 just outside the tasting room…

It was getting late in the day so many shops in town were closing up, however we did manage to find a kugelhupf at a local bakery for breakfast the next morning. After our full day we headed back to Colmar to enjoy our bottle of Cremant and recharge before our big dinner!