Temple of Heaven contains quite a few centuries-old religious buildings where the emperor would make sacrifices for the harvest, fortune, etc, and is now a large urban park. Just a few miles from our hotel, it was easy to get to via metro (Tiantan stop) with an exit directly into the park’s East Gate.

Lots of bikes outside

A large ticket booth was to the right, so I bought my all-inclusive ticket, then made my way through one of the ubiquitous Beijing security checks (bags through x-ray). I started my exploration to the right at the Animal Pavilion and then the Divine Kitchens. For these I needed a second ticket to enter but there was no sign in English to explain this. The security guard pointed to a small kiosk where Chinese tourists were handing over an ID and getting a secondary ticket; I followed their lead with my US driver license and got my second ticket too. The buildings were quite ornate. Some snow still around so you needed to be careful about icy spots.

As I walked toward the Imperial Hall of Heaven I heard music and singing; coming around the corner I saw a large group of people passing around songbooks and stayed to watch for a few minutes. 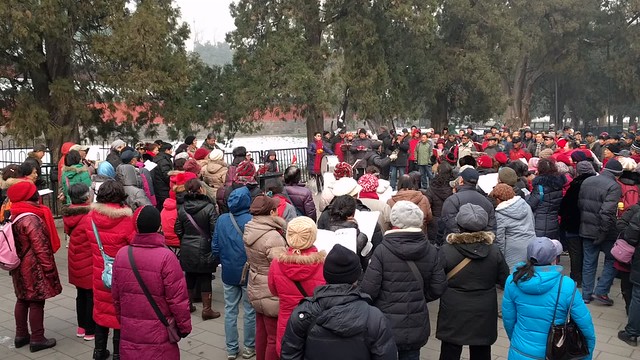 Click on the above to show as a video. Everyone in the group was older than me and the singing was awesome.

Around the corner were hundreds of locals hanging out in the sub-freezing weather, playing dominoes and hacky-sack. Not too far off was the Long Corridor and an entrance to the temple area itself. Starting on the north side is the huge altar complex. In the middle of the plaza was an elevated strip of stone, which apparently was the roadway reserved just for the emperor that lead all the way to the Circular Mound altar. From here I doubled back toward the Abstinence/Fasting Palace which also needed the secondary ticket. This time I knew what I was doing and got in quickly! This large complex was a palace for the emperor to prepare for his rituals at the various altars, and was quieter than most of the park. After walking several miles in the cold my face and fingers were becoming numb, so I hurried through the Double-Ring Longevity Pavilion area, which featured amazingly intricate painting. Even on a cold day the Temple of Heaven complex was quite amazing and well-worth the visit.